November 2019 – The Inishowen Rivers Trust were delighted to welcome the Earth Horizons, an independent film production team, to Inishowen to meet with the Trust directors and volunteers.  Earth Horizons produce the popular environmental programme Eco Eye which airs on RTE and launches into Season 18 in January 2020.

Presenter Anja Murray, who has a keen interest in water related issues, arrived in Glentogher on a grey morning at the end of November to meet the team and take part in brash collection with local volunteers. The brash was collected from a pruned Norway Spruce plantation and bundled, packed onto a trailer and transported to a site on the Glennagannon River, Carndonagh where it will be used for a bank erosion control project in the summer of 2020. Anja learned from the volunteers why they had gotten involved with the Trust and what issues they were concerned with.

The team also visited the Bredagh River, where an ongoing project to develop a river trail became the genesis of the IRT back as far as 2013. Directors Mervyn Norris, Trish Murphy and Claire Thompson were on site during filming and many of the volunteers were also interviewed.

Don’t forget to tune into Eco Eye each Tuesday night at 7pm or view it on RTE Player at any time. 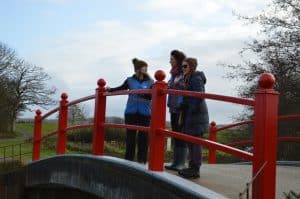